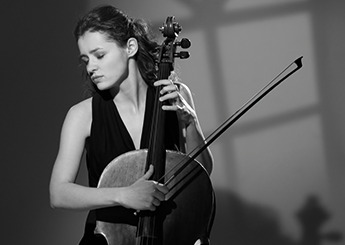 Coming from a family of musicians, Anastasia Kobekina was born in Ekaterinburg in 1994. She began the cello at the age of 4 and gave her first concert with an orchestra at the age of 6. After a more than promising debut, Anastasia performs with the greatest orchestras such as the National Orchestra of Russia, the Moscow Virtuosos, the Mariinsky Orchestra or the Symphony Orchestra of Vienna, Warsaw and the Camerata Baltica. Anastasia has collaborated with many renowned conductors such as Vladimir Spivakov, Krzysztov Penderecki, Heinrich Schiff or Valery Gergiev. She also performs as a soloist in prestigious venues such as Berlin’s Konzerthaus, New York’s Lincoln Center, Moscow Conservatory Hall and Bolshoi Theatre. After graduating from the Central School of Music in Moscow in 2012, she continued her studies as a young soloist at the prestigious Kronberg Academy in Germany with Franz Helmerson, thanks to the Steigenberger/Rath scholarship. Value does not wait for the number of years, Anastasia has played chamber music with great names in classical music such as Gidon Kremer, Yuri Bashmet, Fazil Say, Denis Matsuev, Vladimir Spivakov and Andras Schiff. Anastasia is the winner of several competitions and has thus won the Landgraf von Hessen prize as well as the Boris Pergamenschikow scholarship from the Kronberg Academy in Germany, finalist of the Eurovision Song Contest in Vienna, Academy Prize from the Verbier Festival in Switzerland, 1st Prize at the Tonali Music Competition in Hamburg and finally, in 2019, 3rd prize at the famous Tchaikovsky Competition in Moscow.
After hearing her in Joseph Haydn’s concerto conducted by Vladimir Spivakov during a concert at the Annecy Classic Festival in 2014, Pascal Escande decided to invite her to the Auvers-sur-Oise Festival the following year with her friend pianist, Anna Fedorova, Denis Antoine Prize from the AVC Charity Foundation of the International Piano Campus Competition, in order to produce her first DVD under the DiscAuverS label. This DVD is a success and the music community begins to hear about Anastasia’s extraordinary talent. It was then that Renaud Capuçon invited her to the 18th edition of the “Musical Summits” of Gstaad where she was doubly rewarded by winning the Thierry Scherz Prize sponsored by the Pro Scientia Foundation and Arte as well as the André Hoffman Prize. A few months later, Renaud Capuçon invited her to the 6th Easter Festival in Aix-en-Provence where Anastasia played Rachmaninoff’s sonata in G minor in the company of the pianist Jérôme Ducros and garnered praise from the national press who saw in her the real revelation of this edition. The year 2018 is also very fruitful, especially in October at the Cello Biennale in Amsterdam where Anastasia plays the concerto for two cellos and orchestra “Antidotum Tarantulae XXI” by and with Giovanni Sollima and the Netherlands Philharmonic Orchestra. On October 11, 2018, the Auvers-sur-Oise Festival is organizing its first Parisian concert at Paris Salle Cortot for the official release of its very first disc produced by DiscAuverS with its partner the pianist Paloma Kouider, in a Miaskovsky program, Frank, Stravinsky. Success was not long in coming and the musical community recognized the talent of Anastasia who was named “BBC New Generation Artist” for the 2018 to 2020 seasons.
A new album with the Bern Symphony Orchestra devoted to Shostakovich concertos n°1| Weinberg | Kobekin under the direction of Kevin John Edusei was released on April 5, 2019 by Claves Records. René Martin invited her to the Folle Journée de Nantes, then to the Folle Journée du Japon a few months later, in May 2019. After her studies in Berlin in the class of Professor Jens Peter Maintz, Anastasia Kobekina obtained her Master’s degree at the Conservatoire National Superior of Music and Dance of Paris in the class of Jérôme Pernoo. Anastasia plays a cello by Giovanni Battista Guadagnini from 1745.

About his record Miaskovsky, Franck, Stravinsky: “A sublime record, romanticism as we like it […]” France Musique – Program “En pistes” – Emilie Munera and Rodolphe Bruneau-Boulmier

Rewatch his concert of July 3, 2021 with Luka Okros

Rewatch his concert of June 18, 2021 with the Orchester de la Nouvelle Europe

Rewatch his concert of June 11, 2021 with Gabriel Bianco